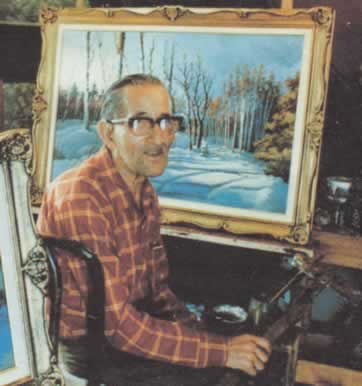 Gordon Dufoe was born in Mattawa on October 10th, 1891.  His earliest memories included his father sketching pictures of animals to amuse him and his brothers. When his family would go camping, Gordon made sketches on birch bark with burnt sticks.  Dufoe never had any formal art instruction, he learned all his skills on his own.

Dufoe worked as a guide in Temagami. He also did some hunting, trapping and worked in the lumber industry. While he worked in the bush he sketched some of his favourite animals and scenes he observed.

Dufoe did a tour of duty in Europe during World War I. He would sketch and paint during his off hours. While he was in a hospital in Toronto recovering from a war wound, Dufoe impressed his fellow wounded soldiers with his drawings.

Dufoe returned to Mattawa in 1919 and married Irene Leclaire in 1922. The couple had 7 sons and 2 daughters. Because of his war injury, Dufoe became less mobile and he eventually set up a studio in his house on Bissett Street and painted professionally. His paintings were sold to people from North America and around the world.

Dufoe had other talents other than painting. He was known for his fascination with old radios and built several of his own. He built his own astronomical telescope including grinding his own lenses and a motor scooter with a sidecar to carry his painting supplies.

There is a park in Mattawa dedicated to Gordon Dufoe between 10th and 11th streets. The inscription on the plaque reads as follows:

Gordon Dufoe (1891-1975) an outstanding artist, craftsman, outdoorsman, soldier, family man and friend is hereby remembered for the beauty and pleasure he brought to many and for his contributions as an exemplary citizen.

Canadian Animals I Have Known by Gordon Dufoe