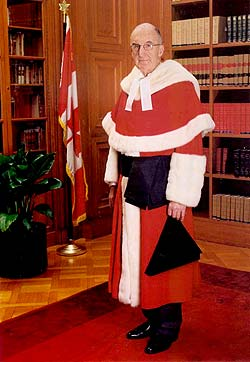 John Major was born on February 20, 1931 in the local hospital in Mattawa, Ontario.

In 1959, he married Hélène Provencher.

He was appointed to the Supreme Court of Canada on November 13, 1992 by Prime Minister Brian Mulroney.

He was a low-key judge. He was known for his belief in providing deference to government and for his succinct writing style.

He was a member of the Supreme Court of Canada from 1995 to 2005. On March 8, 2006 he was appointed by Prime Minister Harper to lead a commission to investigate the Air India Bombing of flight 182 and its trial. John C. Major continues to live and work in Calgary.