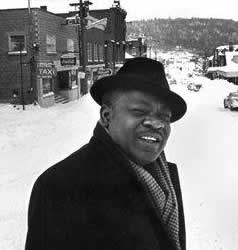 Saint-Firmin Monestime was born on December 16, 1906 in Port au Prince, Haiti. He graduated from Medical School in 1936. In 1945, he came to Canada for a better life. During this time, he met and courted Zenaida Petschersky, a Russian immigrant.

In 1951, he establishes himself in Mattawa and opens a clinic. On February 8, 1953, he marries Zenaida Petschersky and they have four children. In 1957, he gets his Canadian citizenship and two years later he is elected the leader of Progressive Conservative Party in Mattawa.

He will always be remembered for the many contributions he did for Mattawa.

The Mattawa Museum is honored to feature a permanent exhibit supported by the Monestime family.